This is a special arena to share views and comments on my works.Naa mi o...

I have conceived the idea of writing this letter since1980, when I was 12 years old.  I canremember vividly that it was in the noontime of Friday 6th March ofthat year. It was on this day that I realized you were my father. Although I found it difficult to believe when I heard grandfather conversing with hisfriend who asked, “Is that Badiu’s son?”

This was indeed a shocking revelation to me! I had beforethat day, strong, full-grown feelings; a bond of love – an affection of a son’s deep attachment to his grandfather. I became depressed, confused and weptprofoundly for many days. I went in secret to ask Iya Eleran-dindin whom I have also believed to be my mother to know where you were living and why youhad never visited us in Ejigbo. She said you had gone to Iwale Asa. I asked her to give me your address so that I could send a letter to you; to ask you to come.

Nmmmmm! What a day! Iya Eleran-dindin looked into my eyes intensely and she cried out with all her energy. I could feel the pains as her heart ached from the absence of you. I don’t have the address, she murmured.  I wept again, knowing it would be difficult to ask you to come home. I cried for several days, when I knew she was your mother and I had believed all this while she was my mother. It pained me even more when I told her I wanted to come over and live with you. She shouted, you cannot go, no you can’t go! She collapsed onto the floor, and screamed, calling your name. 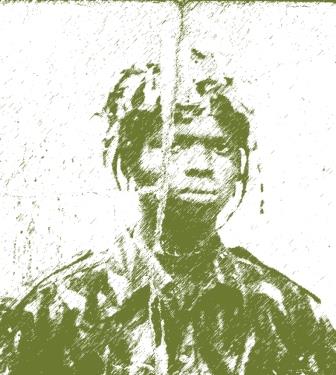 My tender age did not permit me to understand what my loving grandmother was telling me about your residence. More often, I would pester her to give me your address and description on how to get to you. Each time Iasked, she burst into tears followed by depression, but finally on one of the evenings of the pestering; she gave me a picture of you. Therein you were standing wearing an Army uniform and a grassy-helmet.Your eyes were gazing at me, as if you knew I will be born a strict semblance of you. The picture and your bookl, A New Geometry for Schools authored by Clement V. Durell are the remnants of you in my possession.

Grandmother, your mother, told me that it is only in the dream state I could see you. Therefore, each night since I leant of you as my father, I would place your photo under my pillow, hoping I would see you in my dream. Every morning since then has been a handful of disappointments and sadness, as I always miss the chance of seeing you and listening to you either calling me, my son or scolding me for being wrong.  When I eat, I would look for you at the otherside of the table, hoping to see you sitting and ordering me to take my share of the meat. But I only see the absence of you. This was also always the case in the mornings when I would be going to school. I would hope to see you escorting me across the dreaded Ojuoluwa junction. I would stop briefly beforeI got there and imagined you there, holding my hand as we walk through to my classroom.

I am sure you knew that your father, my grandfather, loved you so much.I was told he cried a lot and locked himself inside his room for several hours when you departed to Iwale Asa. It took the whole community to break open the door. He almost killed himself. Your newly wedded wife, my mother fainted. She almost lost her one month old pregnancy. If that had happened, I would not have had the opportunity to come to this world. For this,I am highly indebted to you, for fathering this process.

I was also told that the day you departed was in the morning of January 27, 1968. You may not be aware of this, but that day was horrible and terrific in the history of our ancient community, Ejigbo. There was confusion everywhere and everybody was in disarray as annoyed soldiers besieged the community.  The soldiers were furious and shot severallyin the air, shouting and screaming. There was panic everywhere. The soldiers left with your body and nobody up till now in Ejigbo could say where you were taken to. This is barely 45 years now, and I still cannot see where you were buried.

Bami, I have met some of your friends who told me you were a great singer. They miss you a lot, as they fondly remember the WEERE and TO-RORO you jointly established with them. My daughter, Adeife, is a resemblance of you, as regards your music prowess. Although she is just 6 years old, I wish to encourage her to be a great musician. Your friends also said that you were a gallant soldier who was fearless and courageous in defending the unity of Nigeria. However, I wish to ask you why they often refer to you as Ewele Onitsha. Your friends could provide neither an answer nor clue to this question. Perhaps you can tell me the reason. I must say that I have picked such traits of fearlessness from you, but this often makes me feel uneasy, as the world itself is filled with dangerous people.

I am happy to inform you that your father took care of me. He loved me dearly; he trained me to be strong, amiable, and friendly; and to devote my life in the service of humanity. He also taught me how to love my neighbors as I love myself. His leadership quality influenced me tremendously. He put the welfare of the people at the centre of his administration when he was the Adele Oba of Ejigbo.

I want to tell you that I have four children.  They are Damilola who is the eldest is 17years old, Atiku is 9 years old; Adeife is 6 years, and Badiu whom I named after you is a year and four months old.

Bami, I wish to see you in my dreams.

The Letter was written by Jelili Atiku to his father, Badiu Olorunfunmi who died on the 27th January, 1968 seven months before he was born. The letter was object of Jelili’s performance titled, Araferaku. Araferaku was commissioned as part of The Progress for Love – A  transatlantic collaborative project by  The Menil Collection, Houston, Pulitzer Foundation for the Arts, St Louis and Centre for Contemporary Art, Lagos, Nigeria.